Pit bull owners: Why did you choose a pit bull over other breeds?

I have only once owned a pit bull in my life, and he chose me rather than the other way around.

I was on the board of our local animal shelter, but (unusually for me) because we were really, really short of staff and I was actually working the floor. And a bedraggled rescue was brought in. It was a pit bull and it was in a bad way – it had barbed wire wrapped tightly around a back leg (clearly got stuck in a fence), and had some much older scars. And it had more ticks than I have seen on just about any other animal in my life. We cleaned it up as best we could and put it in isolation for the night, but we couldn’t keep it there indefinitely, and we couldn’t risk it in general population, so it had to go out to foster.

I don’t know, but the plight of the animal just spoke to me, and so I said I would foster him myself. Well, as anyone who has worked with animal rescue shelters will tell you, a lot of fosters end up not coming home because they melt the hearts of their hosts, and that was true of him as well.

When we go home I was worried for my kids and worried for my other dogs too, so I moved one of the dog houses to a corner of the yard and double chained him. I was still pretty sure he had been used as a fighting dog (from all the scars – this was in the Caribbean, and dog fighting was pretty common) and I didn’t want to take any chances. But within a day or so we were pretty damn certain he was meek and mild and so the chains came off. It took about three weeks (and a couple of trips to the vet for some operations to stitch up his worst wounds), but eventually he came out of his corner and played with my other dogs. He was so meek that he actually played with our neighbour’s rabbit one day when it came hopping through the fence.

Sadly he died a couple of years later from unrelated causes. He never fully recovered his strength, but I like to feel he lived a happy life for the couple of years that I had him.

Still miss ya, buddy. Love you. 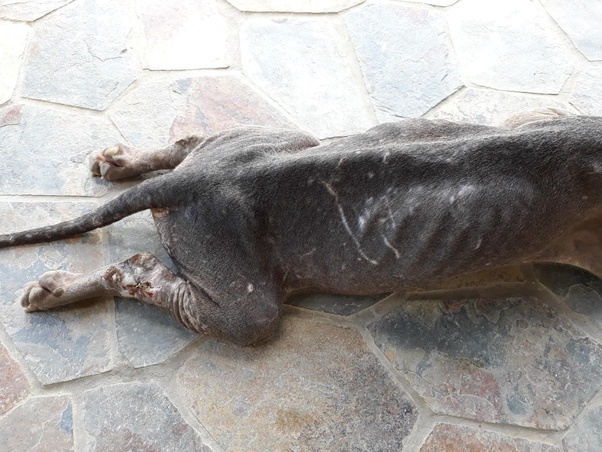 Happier days were to come… 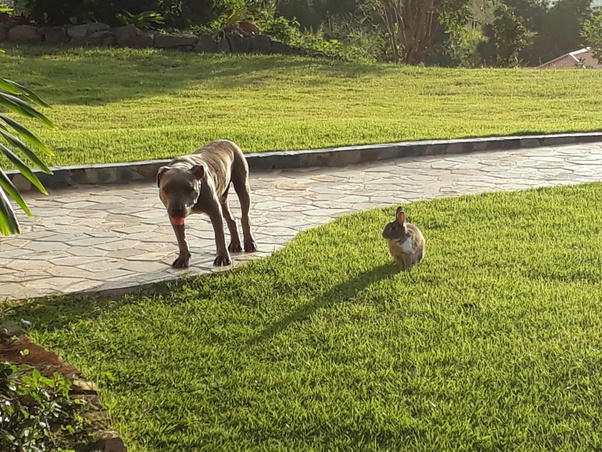